“It is not the strongest of the species that survives, nor the most intelligent that survives. It is the one that is the most adaptable to change.” – Charles Darwin

For the last couple of decades, financial experts and executives around the world have pointed to the same fact: the annual budget is well past its useful life, and companies who incorporate a rolling forecast, experience markedly increased revenue and profitability, smarter and faster decision making, and greater shareholder value.

As Gregory V. Milano and John R. Cryan of Fortuna Advisors said in a recent article:

“The annual budget may be past its useful life. If most companies stepped back and assessed whether they’re really earning an adequate ROI from their budgeting processes through superior decision-making and optimal resource allocation, we believe, many companies would curtail their current practices.”

Yet despite decades of evidence pointing to a greater return on investment when implementing rolling forecasts, some companies are still using the outdated tool of the annual budget.

Historically, new and innovative ideas, no matter how efficient, always encountered obstacles and skepticism, even when old practices don’t produce desired results. Whether a company’s hesitance to adopt a rolling forecast is due to misinformation or fear of innovation is a subject for another day. In the meantime, if you’re still on the fence, these are the top five reasons the annual budget is losing to the undoubtedly better rolling forecast:

The traditional annual budget process takes too long, with companies using up far too many resources to finalize it. Some companies start in May and are barely done by December–on top of that, by the time the fiscal year begins, many budgets are already obsolete. Since the annual budget is static in nature, it doesn’t account for any fluctuation in business conditions, rendering it obsolete if any metrics change.

On the other hand, with rolling forecasts the process is ongoing and updated throughout the year. Instead of leaving the incredibly arduous and costly budgeting effort for a determinate time of the year, rolling forecasts are constantly changed and updated, every month or every quarter, allowing the financial department to access actionable and up-to-date information throughout the year.

The annual budget is, in simple terms, a guess (albeit highly educated guess). And when it’s finally published, it’s usually inaccurate, since it doesn’t account for market volatility or internal changes in the company that can’t easily be predicted. According to Steve Player, a budgeting and planning expert and the North American program director at Beyond Budgeting Roundtable, 20 percent of companies can’t rely on the budget on the first day of the fiscal year and two-thirds of companies see their budgets as completely worthless six months into the year because the numbers are simply not accurate.

On the other hand, with rolling forecasts companies are able to mitigate the risk of outdated data and scenarios. In fact, according to Aberdeen Group, 71% of top performing organizations eliminated the risk of inaccuracy by continuously updating (rolling) the forecasts “to reflect current business conditions”.

With business rules, workflow and regular variance analysis that build continuous data improvement into the process, organizations with rolling forecasts are twice as likely to be able to even measure their accuracy of forecasts.

Businesses today need to be nimble and be able to react to changes in the market with speed and confidence. Traditionally, companies have attempted to do this using the annual budget but as we’ve mentioned above, the process is all too time-consuming and static, leaving companies stuck in the past and unable to make timely decisions.

With rolling forecasts, companies are twice as likely to have real-time updates to financial metrics and more than twice as likely to allow business users to create their own reports without relying on IT.  This provides businesses with the much-needed agility to adapt to current market changes on the go.

The rolling forecast takes into account that the modern role of the financial leader is less of a number-cruncher and more of a strategic business partner; instead of looking back, the rolling forecast is constantly looking forward, flexible enough to adapt to present circumstances and provide a continuous planning process that produces better results in the future.

When using annual budgets, besides all the issues mentioned above, you are (by definition) forecasting only for the next fiscal year and nothing beyond that point. If anyone in your team wishes to plan for anything beyond whatever remaining months you have in the budget, they have to wait till the next annual budget is finalized and at this point, it might be all too late.

Rolling forecasts, instead, keep moving and updating as months go by, so you always have access to a clear, up-to-date picture of what’s coming ahead. The rolling forecast is a continuous, organic planning document that adapts to your business needs. According to Aberdeen Group, with rolling forecasts companies are 4.5 times as likely to perform “what if” scenarios, allowing them to plan for factors outside of their control, and resulting in a smarter outlook into the future. 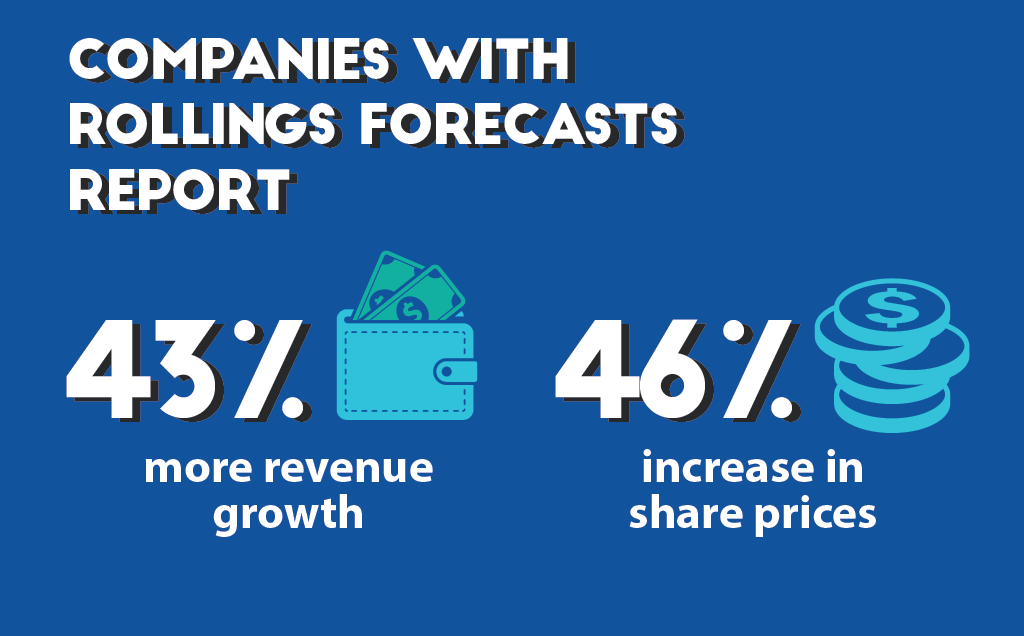 What’s most impressive about the rolling forecast is that the process translates into concrete results in terms of revenue, profits, share price and even credit rating. Companies with rolling forecasts report 43% more revenue growth over a 24-month period; those with reliable forecasts also saw share prices increase by 46% in a three-year period; lastly, investors today demand more frequent and accurate projections and unreliable processes impact share prices with inaccuracies and outdated information–companies with reliable processes saw overall share prices rise 33% more than those without.

With so many tangible proof points for moving to rolling forecasts, and countless success stories from again for the past three decades, why are some companies are still hesitant and stuck in the past?