Chasing a Unicorn? How You Can Help Challenge Gender Inequality in the Workplace

Before COVID-19, the World Economic Forum (WEF) predicted it would take 257 years to close the gender gap. But the pandemic has disproportionately affected women+, so this estimate is likely going to increase (talk about a Debbie Downer). Despite this, there is still a lot to celebrate as some nations celebrate Women’s History this month. As we look back, we can admire the women who persevered and paved new ways for current generations. So what’s another 257-ish years after many hundreds of years of progress?

To celebrate this year’s theme for International Women’s Day, “Choose To Challenge,” we looked at four obstacles that women+ continue to face in the workplace. With each issue, there are suggestions for how you can help challenge them as well as how to be better allies to your marginalized colleagues. This is not an exhaustive list, but includes the intersection of race, gender, sexuality, age, disability, and more because gender inequality isn’t just a women’s issue—it’s a people issue. And all of us, not only women+, need to be a part of the conversation to attain the unicorn that is gender parity.

Terminology
Women+
All women, non-binary people and anyone else who identifies as underrepresented because of their gender identity.

The gender pay gap is the average difference between the wages women+ and men make. There is a common misconception in countries, where it’s illegal to pay women less than men for the same work, that the gender pay gap is a myth. This, of course, is not true as many women+ can attest to the fact and the data backs them up.

Here are the facts in the U.S.: 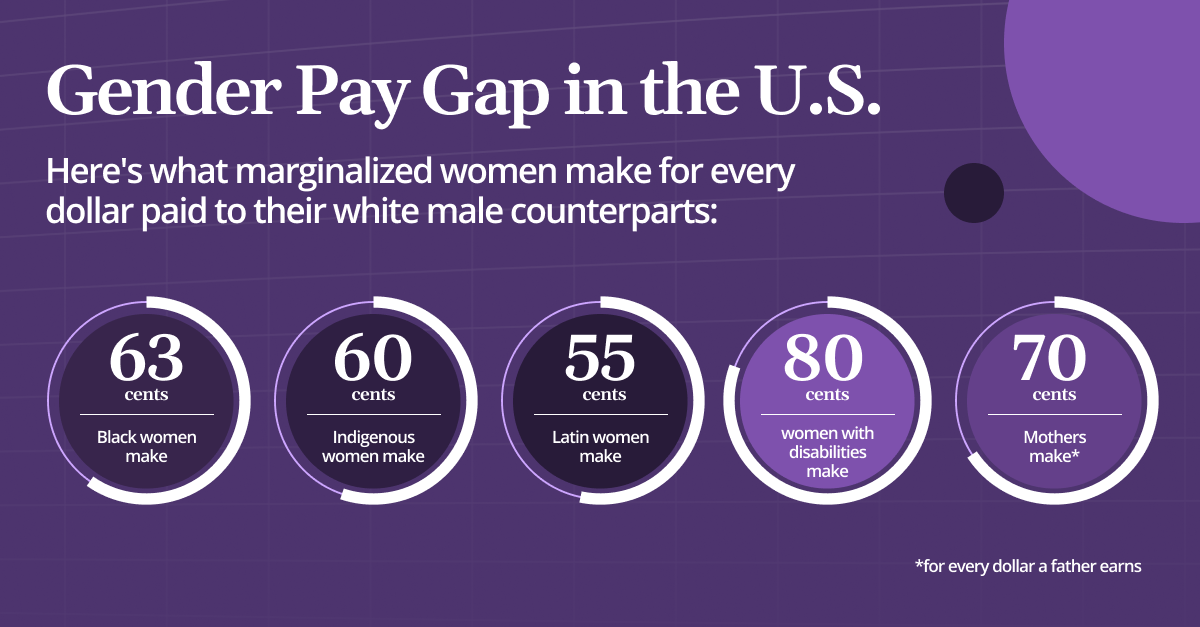 Here are the facts in Canada:

Since most studies and surveys about the pay gap typically don’t include different gender identities, it’s difficult to say how much they earn to the dollar of cisgender men and women. But the evidence we do have shows they aren’t exempt from the gender pay gap either. For example, one study found that transgender males reported a slight increase in earnings, while transgender females reported a decrease of about 32% in their salaries. The National Transgender Discrimination Survey showed that 15% of trans and gender-nonconforming people reported living well below the poverty line, earning less than $10,000 per year. For people of color, the percentage was worse: 28% of Latinx and 34% of Black trans and gender-nonconforming people.

How can you challenge the gender pay gap in the workplace?
What are we doing at Vena?

Workplace harassment is any vexatious and unwelcome action, words or behavior towards another employee, including sexual, physical, verbal and non-verbal harassment. Demeaning jokes and innuendos and circulating offensive pictures are just as much harassment as physical or sexual violence.

Women+ who fall into further minority groups typically experience more harassment than their white, female counterparts and especially more than men. This includes women+ who are also people of color, people with a disability, aged 50+ and members of the LGBTQIA+ community.

How can you challenge workplace harassment?
What are we doing at Vena?

Microagressions are everyday instances of thinly veiled discrimination against any marginalized or minority group. These microaggressions can be about race, gender, sexuality, age, mental health, marital status and more. Microaggressions differ from overt discrimination because they’re subtle, usually don’t have malicious intent and the person saying them may not realize their words are discriminatory.

It’s important to remember that impact matters more than intent here. Microaggressions can adversely impact people’s mental health, causing anxiety and stress and making people feel undervalued. Microaggressions can also perpetuate stereotypes and reinforce bias so when they’re committed against women+, compounded with other challenges women+ face in the workplace, they contribute to a toxic work environment. Notably, women who are the only woman in the office experience more microaggressions than women in groups with other women and more than men who are the only man in the office.

How can you challenge microaggressions?
What are we doing at Vena?

Drake sings, “Started from the bottom, now we're here,” but for a lot of women+, it’s more like “Started from the bottom and we’re still there.” A study by McKinsey showed that about one in five C-suite executives is a woman and only one in 25 is a woman of color. They also found that “for every 100 men promoted to manager, only 85 women were promoted—and this gap was even larger for some women: only 58 Black women and 71 Latinas were promoted.”

Part of this could be because of unconscious bias that hiring managers have toward women and certain women of color. One experiment by two assistant professors at Harvard Business School revealed that “employers favor men not because they are prejudiced against women, but because they have the perception that men perform better on average at certain tasks.”

Terminology
Unconscious bias
A set of social stereotypes you form outside your own conscious awareness about certain groups of people. Since these stereotypes or biases are unconscious, they influence your attitudes toward people from those groups without you realizing it. To overcome unconscious bias, unsurprisingly, you must become more conscious of your biases.

Another cause could be women not supporting one another because they are set up to compete against each other by poor hiring practices. For example, one study showed that after a company hired a woman for a senior leadership role, the chance that a second woman would join that rank dropped by 50%. In another study, corporate boards would hire two women and no more to meet a “satisfactory” level of diversity, which researchers called “twokenism.”

How can you challenge the lack of opportunities?
What are we doing at Vena?

What Will You Choose To Challenge?

The gender pay gap, workplace harassment, microaggressions and lack of opportunities are just a day in the life of women+. Sometimes, it’s hard to believe that this is where we are after hundreds of years of progress. But the sobering truth is there used to be a time when women couldn’t own property or vote. Less than a hundred years ago, women weren’t even considered persons in Canada. And it was only in June of 2019 that people could identify as neither male nor female on Canadian ID. We have indeed come a long way, but have so much further to go. Use this as a simple guide or a starting place for how you can choose to challenge yourself, the people around you and gender inequality and inequity as we move forward together.