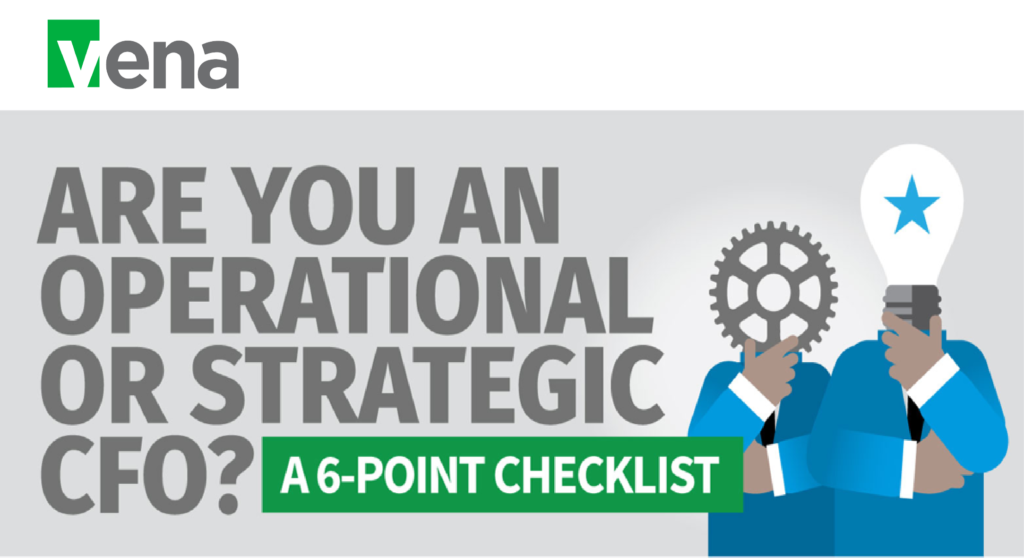 Are You an Operational or Strategic CFO? A 6-Point Checklist

You’d be hard pressed to find a CFO today who doesn’t consider themselves strategic but – as with most things – that’s a relative term. The amount of time CFOs actually spend on strategic initiatives spans a wide spectrum.

At one end of the spectrum are what we call traditional or operational CFOs who see their role primarily as getting the numbers right and reported in a timely manner. At the other end are modern or strategic CFOs, who spend their time informing business-wide, strategic decisions, on equal footing with their colleagues in the C-suite.

More than just a qualifier of a finance leader’s role, how strategic a CFO is has implications on the success of their departments, and even their organizations as a whole. In my experience, companies with modern, strategic CFOs tend to:

•    Look at CFOs and their finance departments as true partners in the business
•    Make smarter, faster, business decisions based on trusted, accurate data

I don’t have a Buzzfeed-style quiz to help you tell whether you’re one or the other, but I have identified six key traits that I’ve found nearly universal among the strategic CFOs with whom I’ve worked. Consider these attributes and grade yourself. Then, do whatever you need to do to develop your strategic capabilities – and to make sure everyone else sees it. 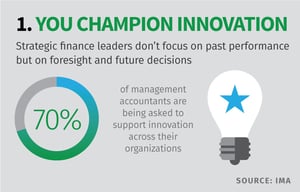 Jeffery Thomson, CEO & President of the Institute of Management Accountants (IMA), finds himself frequently speaking about the role of CFOs and how the accounting function in general needs to evolve. Just recently, for instance, he was interviewed for an article that appeared on Al Arabiya Network, a news source in the Middle East. He suggested that the next generation of finance leaders are taking their operational know-how and using it to advance breakthrough thinking across the organization. According to an IMA study on the subject, 70% of its members are now being asked to support innovation.

“The CFO team role over time, at varying rates of maturity around the world, has been evolving from value steward, protecting and safeguarding assets, focusing on hindsight and insight, to (include) value creation, sitting at the strategy table to help conceive and implement new ways to generate sustainable growth, (to) focus on insight and foresight,” he said. “As it relates to innovation, CFO teams increasingly serve in an oversight role including funding approval, but also up front in funding the innovation through experimentation and prototyping.”

Strategic CFOs don’t just think about how the corporation performed, but how performance could change based on radical new approaches to everything they do. It doesn’t mean you have to start working in a lab, but you should be one of the senior leaders contributing to innovators’ successes. 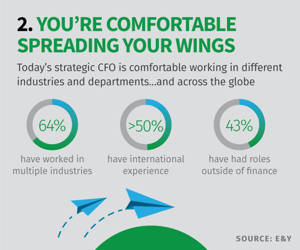 Every year consulting firm Ernst & Young publishes a report called “DNA of the CFO” which uses survey data to offer a more granular look at how finance leaders’ roles are changing. This year’s research, which was highlighted by the South China Morning Post, shows the best-in-class CFOs are eager to spread their wings. For example, 64% of CFOs surveyed have worked in multiple industry sectors, more than half have done so internationally, and 43% have had roles in departments other than finance. This obviously helps in taking more than an operational look at what a company is capable of doing.

“Finance leaders will increasingly be characterized by more right-brain attributes – such as empathy, innovation and imagination – that will help them inspire and generate loyalty,” the article said. “Communication styles will also need to change to become highly adaptive. Digital channels and formats – from tweets to blogs and beyond – will be important elements of the CFO’s communication toolkit to reach internal and external stakeholders effectively.”

Strategic CFOs are inherently people-oriented — and use whatever channel necessary to communicate effectively.

There aren’t many CFOs who sing the praises of using their gut instinct, but the best of them know that they need to bring more of the analytics at their disposal to other key decision-makers in the company. A post on RealBusiness.com summed it up well, suggesting that harnessing information is one of the hallmarks of next-generation financial leaders.

“CFOs are turning to modern financial technology to create a culture of analytics. Big data has enormous potential to give companies real-time critical information – and the best finance leaders have been quick to embrace that potential,” the article said. “Inaccurate data can be a huge blow to a CFO’s credibility. The top finance chiefs fully understand this, and they make sure to stay consistently up-to-date with accurate business performance data, leveraging modern processes and technology to ensure accuracy.”

Earlier this year, research from Grant Thornton showed 70% of CFOs believe they’ll increase their use of analytics this year.

Strategic CFOs stay on the cutting edge of data-driven thinking – otherwise they know they might get cut.

4.    You Marry Strategy With Agility 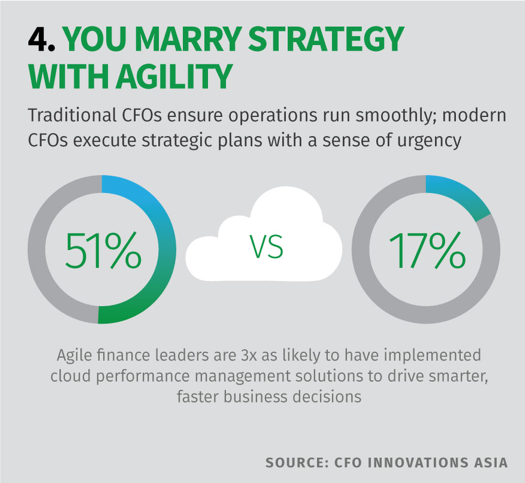 There’s nothing more painful than a long brainstorming process followed by a detailed plan that winds up gathering dust somewhere in the office. Traditional CFOs made sure operations ran smoothly, but strategic CFOs are increasingly focused on ensuring plans are executed with urgency.

Of course, it’s not easy to make changes, even in some of the smallest organizations. That’s why CFO Innovation Asia recently offered an in-depth look at how to develop a more agile approach to the way they work. Here’s one of the behaviors the author identified as having a major impact on how quickly things can move:

“(The CFO) provides management information on a self-service basis using business intelligence systems, including dashboards with drill-through interrogation. This enables the financial planning and analysis role to extend its remit to consider a wider range of data, including new forms of big data, and provide the analysis and insight needed to improve the business’ performance.”

The report the article is based on actually shows agile finance leaders are far more likely than others to have fully implemented cloud-based corporate performance management solutions (51% vs 17%).

Strategic CFOs don’t just know their KPIs inside-out. They also make sure the rest of the organization has access to those KPIs, and can integrate new ones into the overall outlook of the company as they emerge.

5.    You Think Long-Term But Work in Short Cycles 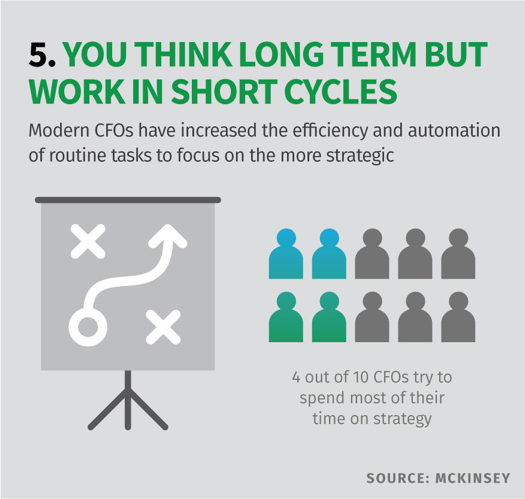 Saurabh Gupta, vice-president of professional services firm Genpact, believes organizations aren’t going to be satisfied with finance departments whose operations move at the same pace they always have. He told Bankless Times that ‘cycle time,’ as CFOs and their teams have traditionally known it, is quickly becoming irrelevant.

“It used to take companies days to close the books on a transaction, but with technological advances the time frame has shrunk to hours. With advancements in robotics, artificial intelligence, the blockchain and distributed ledgers, that whole conversation (about the amount of time to close transactions) will become irrelevant,” Mr. Gupta told the magazine. “Companies are looking at how to create value from these tasks too, and not considering them simple functions anymore.”

In fact, consulting firm McKinsey showed survey data that said four in 10 CFOs are trying to spend most of their time on strategy, which means less time on easily automated tasks such as closing the month-end books.

Strategic CFOs take the notion of continuous improvement to a new level by capitalizing on the near-term opportunities to transform their team in ways that will matter for years to come.

Teamwork is important in any area of a company, but in finance the notion of what the team does is getting greater scrutiny, and with good reason. An analyst from research firm AQPC actually wrote a post that argues in great detail that transaction processing may not be the best place to focus the people at your disposal.

“Many organizations are spending a lot of money on highly trained accounting labor. But they’re barely scratching the surface of what they could achieve with that brainpower,” she says, citing research that showed top-performing companies spend only 30% of their time on transaction processing. “The key to escaping the transaction rut is to get really, really good at transaction processing, so you can do it in a fraction of the time. And the only way to get there is through process management and standardization to best practices.”

This is just one good example of where CFOs can take what they know about the way things have always been done and begin to retool them in such a way that they provide a bigger or more direct impact on the overall organization. What’s more, such an approach equips your team with the skills, tools and mindset to become modern CFOs of the future.

Whether you’re a strategic or operational CFO entails a number of factors – how you spend your time or manage your team, for example – but ultimately it boils down to your thinking. Compared with traditional, operational CFOs, you’re a modern, strategic finance leader if you think in data-driven terms about:

•    How finance can drive company-wide strategy and innovation
•    Your role spanning functions, departments, regions and more
•    Finance operating at the intersection of strategy and agility
•    Long-term strategy (while working in increasingly shorter cycles)
•    Grooming your successor(s) today

Strategic CFOs, in other words, haven’t forgotten and must never forget about how to be good at operations. They’re just getting really good at almost everything else.