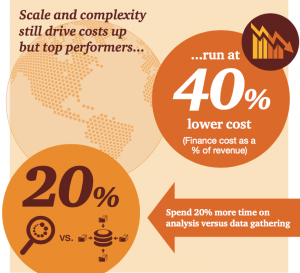 Global Finance Benchmarks: These Are the Numbers to Watch

Every day online and on social media, you’re likely to come across articles and blog posts with titles like, “What Successful People Do Differently,” or “The Morning Routines of Insanely Successful People.” It would be a stretch to call these kinds of pieces benchmarks, but the idea is similar: Only by looking at the differences between yourself and your successful peers can your self-improvement process begin.

At the organizational level – namely for CFOs and their teams – one of the best resources might be consulting firm PricewaterhouseCoopers (PwC)’s 2015 Global Finance Benchmarks report, which combines survey research with in-person executive interviews and other sources. The title is PwC’s own take on the “successful people” meme — it’s called Breaking Away: How leading finance functions are redefining excellence.

If you don’t have time to wade through the entire 70-page document, just keep the following stats in mind: According to PwC, top performing finance departments run at 40 percent lower cost than their peers, and spend 20 percent more time on analysis vs. data gathering.

While there are a number of factors that can contribute to those differences, let’s hone in on how PwC views the role of IT:

“There have been great strides in the areas of enterprise performance management (EPM) and data warehousing. Organizations are making connections between financial planning, operational planning and sales planning to create better integrated processes and are considering how new tools can assist in that endeavor. The resulting finance system simplification should mean a more integrated finance systems roadmap. But the leaders are now doing far more.”

Specifically, PwC suggested that the best finance departments choose the tools they use carefully, leaning towards those that are cloud-based with “quick implementation and low skill requirements allow for easy implementation by finance professionals.” If your team has spent years investing in carefully built Excel templates, models, and reports, for instance, then adopting an Excel-based enterprise or corporate performance management solution might make better sense than a more complicated and expensive system that requires extensive training and IT involvement.

Staffing firm Robert Half has released a finance department benchmark report of its own, which captured not only the increased workload imposed on today’s finance teams, but an increasing difficulty in getting it all done. Much of these dual challenges stems from the number of financial processes that still rely on manual-intensive tasks, perhaps most notably in the area of financial close management and consolidations:

“The high volume of reconciliations has an impact on accounting and finance departments because the process remains labor-intensive and is often manual,” the Robert Half report said. “More than half (54 percent) of U.S. executives said their reconciliation process is manual, but that percentage has steadily declined over the past two years, from 59 percent last year and 65 percent in 2013.”

Much like the PwC report, Robert Half includes interviews with finance staff who say they are introducing IT to help speed up financial close and other tasks while moving towards more forecasting and data-driven decision making. That’s the thing that good benchmarks do. It’s one thing to show you where your gaps are vis-à-vis your peers. It’s another to help you see how you might close them.

The post Global Finance Benchmarks: These Are the Numbers to Watch appeared first on Blog | Vena Voice | Vena Solutions.