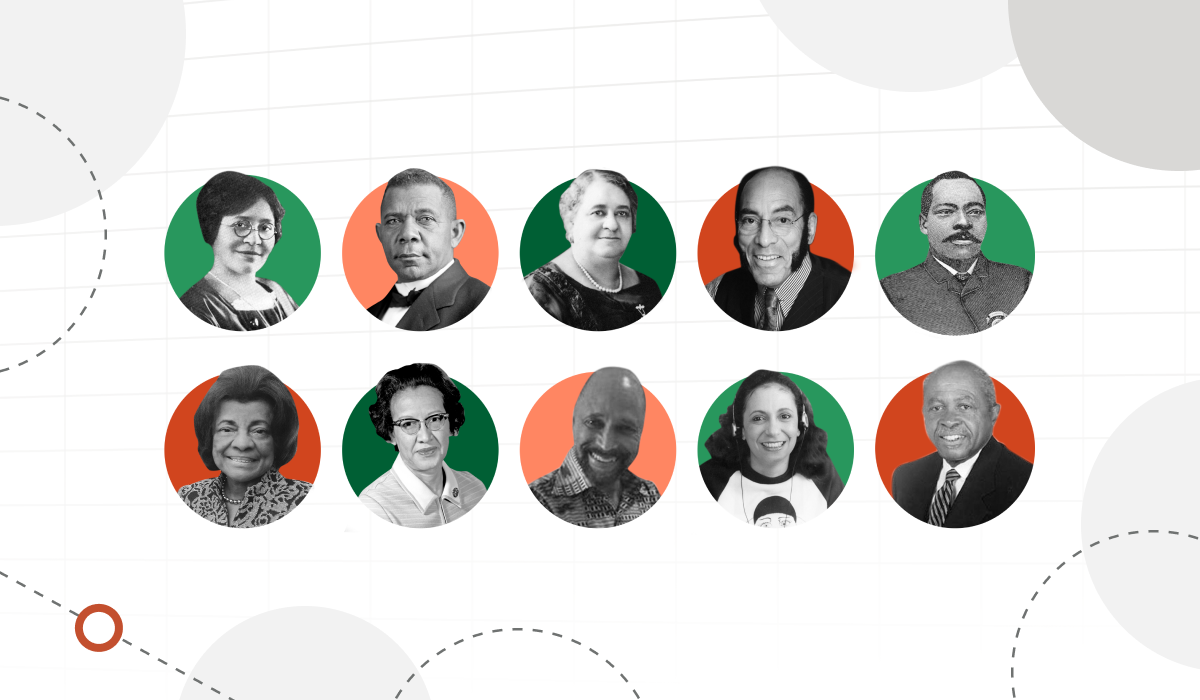 The past, present and future are all connected. That’s why Black History Month is an ideal time for everyone in your organization to stop, reflect, look around and think about how far your company has come—and has yet to go—in terms of diversity, equity and inclusion. It’s also a great time to shine a well-deserved spotlight on some of the pioneers who used their influence to fight injustices and blazed new trails for others in their industries.

In honor of those pioneers, we’ll be shining a spotlight on 10 influential Black business and tech leaders in this blog.

1. Granville Woods: The most prolific Black American inventor of his time

Granville Woods, known as the “Black Edison”, was a prolific inventor in the late 19th century. He held more than 60 patents in the U.S., many of them for improvements to other technologies. Most of his work centered on trains and streetcars and he invented 15 different appliances for electric railways. The Synchronous Multiplex Railway Telegraph was his most notable invention and the one that helped earn his nickname. The story goes that Thomas Edison tried to sue Woods for his invention, but failed. Edison then tried to partner with Woods, but he refused.

2. Maggie Lena Walker: The first Black American woman to charter a bank and be its president

In the early 1900s when it wasn’t uncommon for white-owned banks in the U.S. to refuse deposits from Black organizations, Maggie Lena Walker started her own in Richmond, Va. in 1903. The bank was called St. Luke Penny Savings Bank and was funded by members of the Independent Order of St. Luke, an African-American benevolent society. In 1930, the bank merged with two smaller Black-owned banks, was renamed Consolidated Bank & Trust and is still in operation today.

Booker T. Washington was a writer, educator, philanthropist and the founder of the National Negro Business League. As a prominent Black American leader at the turn of the 19th century, Washington was committed to improving the economic position of Black Americans through education. He was the author of 14 books and his autobiography, Up From Slavery, first published in1901, is still widely circulated and read today.

4. Annie Malone: The first Black woman millionaire in the U.S.

Annie Malone was an entrepreneur and philanthropist during the early twentieth century. After apprenticing as a hairdresser, she developed her own hair-care products which she sold from a buggy and door-to-door. As the demand for her products grew, she developed the line into her Poro brand of beauty products and opened her first shop in 1902. In 1917, she founded Poro College, an educational and commercial enterprise in St. Louis. By 1920, she became the first Black woman millionaire in the U.S.

Roy Clay Sr., aka the “Godfather of Silicon Valley,” is a computer science pioneer, inventor and entrepreneur. Armed with a degree in mathematics and led by his interest in technology, Clay moved to Silicon Valley in the late 1950s where he landed his first job in computer science. The first computer program that he developed was software that measured how radiation spread after an atomic explosion. He was a founding member of the computer division at Hewlett-Packard, leading the team that developed the HP 2116A minicomputer. He left HP in the early 1970s to start his own business, ROD-L Electronics.

6. Katherine Johnson: One of the first African-American women to work as a NASA scientist

Katherine Johnson was a mathematician who held a 35-year career at NASA and its predecessor organization, NACA (National Advisory Committee for Aeronautics). The space agency noted Johnson’s historical role within its organization, recognizing her as one of the first African-American women to work as a NASA scientist. She was known for mastering complex manual calculations, many of them fundamental to the initial stages of the Space Shuttle program and to countless NASA projects.

Clarence Ellis, also known as Skip, was the first African-American to earn a Ph.D. in computer science in 1969. As a sought-after computer science researcher, Ellis worked in various firms and led teams that went on to develop software solutions such as OfficeTalk, Operational Transformation (OT) and FlowPath.

In 1953, Ernesta Procope founded E.G. Bowman, an insurance company in Brooklyn, N.Y. In 1979, when she moved the business to lower Manhattan, E.G. Bowman became the first Black-owned business on Wall Street. Some of its prominent clients include General Motors Co., PepsiCo Inc., Timer Warner, Tiffany & Co. and others. Over the years, Procope has been an active voice for insurance reform which has led to the abolishment of many discriminatory practices in the industry.

Earl G. Graves Sr. was a publisher, businessman, entrepreneur, philanthropist and author of the book, How to Succeed in Business Without Being White: Straight Talk on Making It in America. As the ultimate champion of Black businesses, he founded Black Enterprise which has been a premier source of essential business information for Black professionals, business owners and entrepreneurs since 1970. He also founded Earl G. Graves Ltd, a media production company, which grew over the years to include publishing, consulting, marketing, radio and television divisions. Graves served as the chairman and CEO of Pepsi-Cola of Washington D.C., the largest minority-owned Pepsi-Cola franchise in the U.S. He was also the director of other Fortune 500 corporations.

Catherine Liggins Hughes is a radio and television personality, entrepreneur and business executive. She founded Radio One (renamed Urban One in 2018), the largest Black-owned broadcast company in the U.S. In 1997, Hughes’ son took over as CEO and she became the board’s chairperson. When Urban One went public in 1999, Hughes became the first Black American woman to chair a public company.

Bringing Diversity To the Decision-Making Table

Feeling inspired? We can all do more to acknowledge, improve and support the experiences of Black professionals and other underrepresented groups every day. The work of making others visible in the workplace and within your industry is ongoing and doesn’t stop at the hiring stage. Find diverse talent and make room for them at the top. Create supportive networks and mentorship programs to help employees navigate the challenges they face in the workplace. As our pioneers have proved time and time again, the time to bring others to the decision-making table is now.

To learn how to authentically build a culture of diversity, equity and inclusion in your workplace, read this blog.