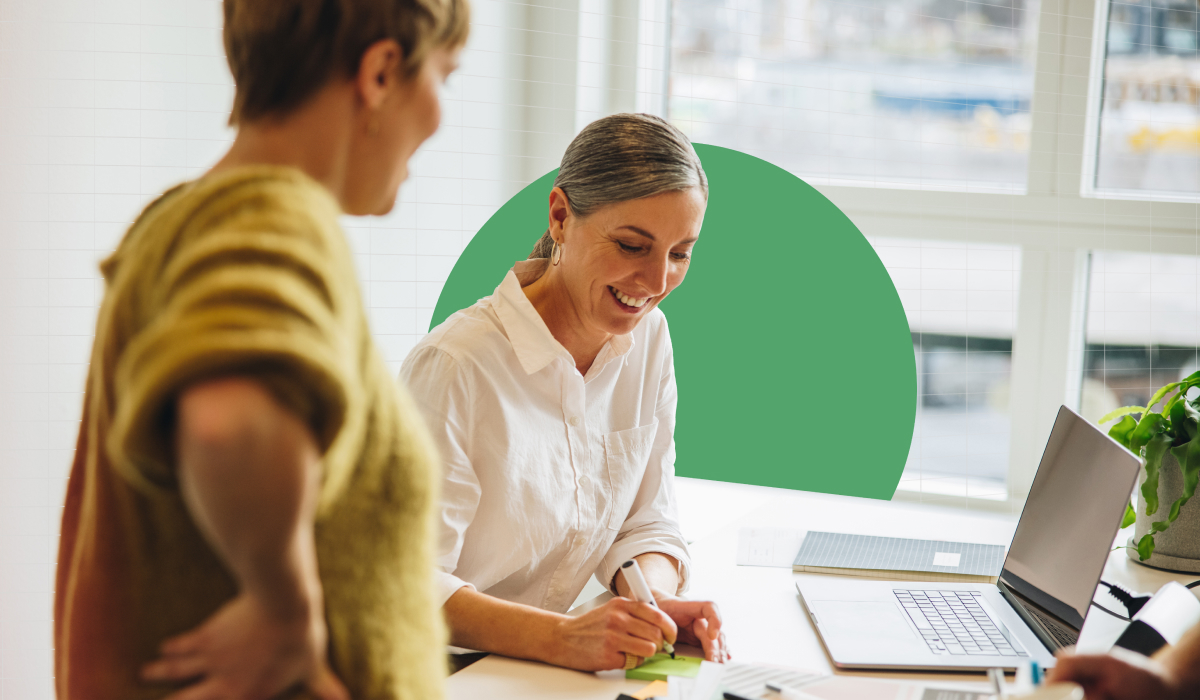 Women in Corporate Finance: Be Visible

This is the fifth and final part of a blog series based on an ebook we published in 2020 entitled, “Women in Corporate Finance: Five Guiding Principles From Leaders in the Field.”

In this post, to close out Women’s History Month, we speak to Jennifer Korbely, Controller with BurgerBusters, Inc.

For this, the last blog post in our series on women in corporate finance, let’s look ahead. Is the future truly female, as Hillary Clinton once predicted?

Given the challenges women have faced since Clinton spoke those words—challenges we’ve explored in our previous four posts—making that future a reality may be more of an uphill battle than we ever realized before. Research by McKinsey & Company found that women’s jobs were 1.8 times more vulnerable to the pandemic than men’s. In fact, from the start of the crisis to June 2021, 64 million women globally had lost their jobs. 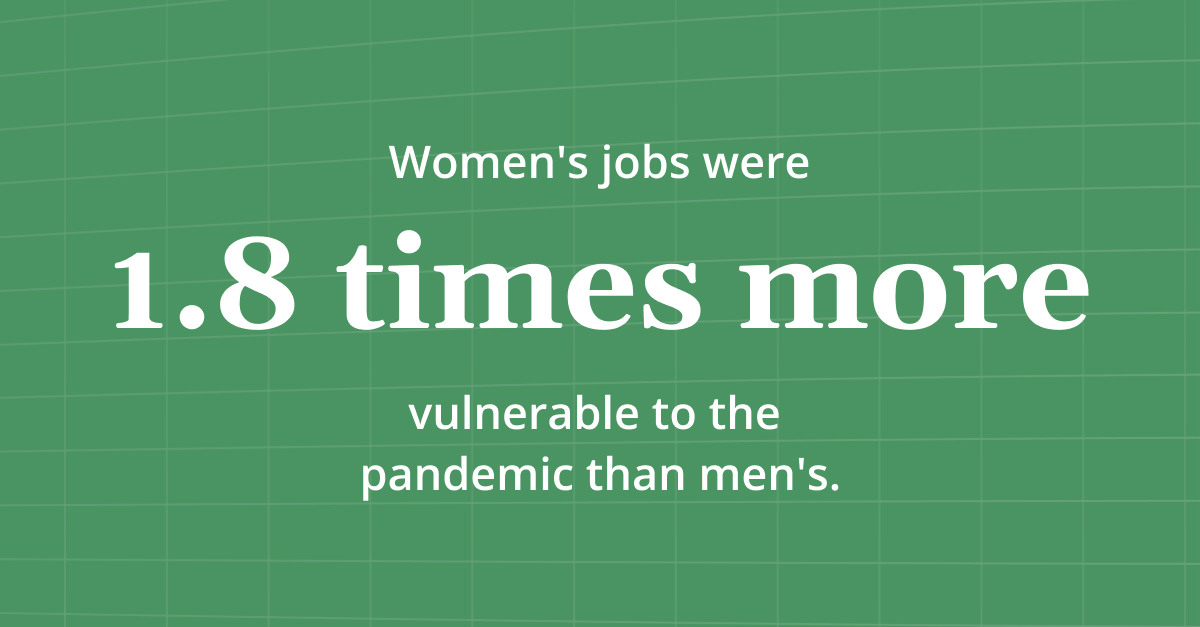 And all of that could have lasting repercussions. Data from the World Economic Forum shows that the estimated amount of time it will take to close the gender gap has increased thanks to the pandemic—from 99.5 years to 135.6.

In the world of finance, specifically, research by Deloitte projects that women will fill 28% of leadership roles in finance by 2030—up from 24% now. That may seem like a win until you realize, in 2019, that same 2030 projection was 31%. Not only that, but the “gap further continues between women in senior leadership roles and in the C-suite, currently standing at 9% but likely to widen to 14% by 2030,” the report states. 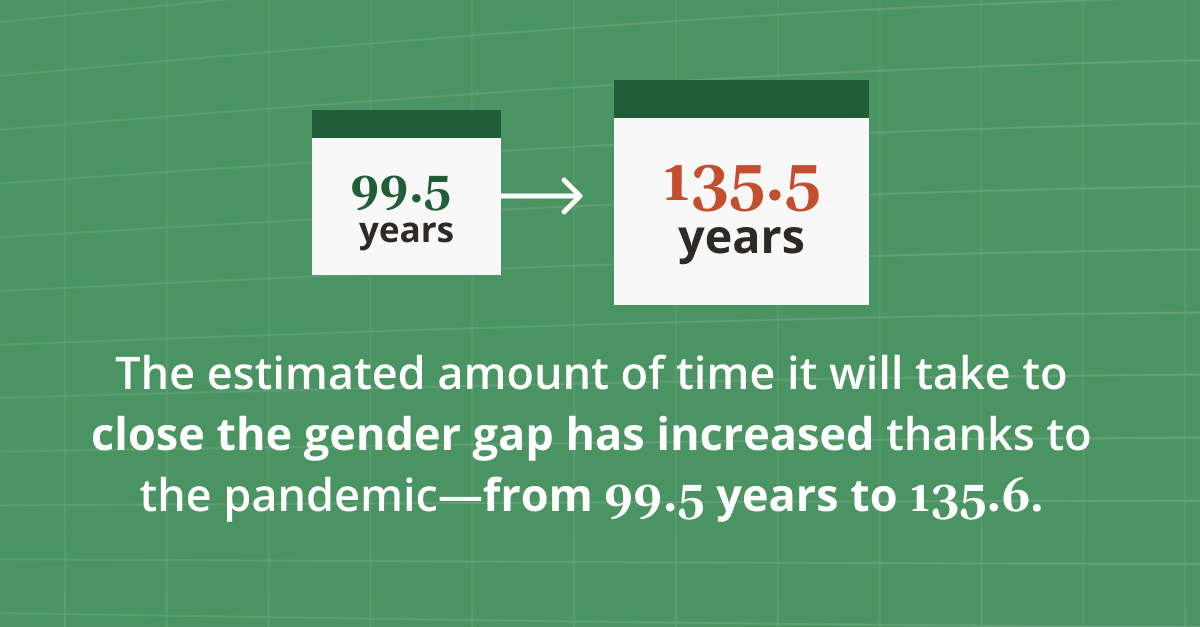 So what will it take to shatter the glass ceiling and bring more fully realized gender parity to the corporate finance workplace? Back in 2020, if you listened to the women we interviewed, there wasn’t just one right way. It took hard-working, ambitious women who understood what they needed to succeed and weren’t afraid to ask for it. But it also took advocates—leaders that understand what women bring to the table—as well as role models and mentors.

“Current female leaders need to make sure to voice their experiences, to help inspire others,” Jennifer Korbely, Controller for BurgerBusters, Inc. and the last corporate finance leader we spoke to, said in 2020.

Today, we can’t help but wonder if that’s more important than ever. 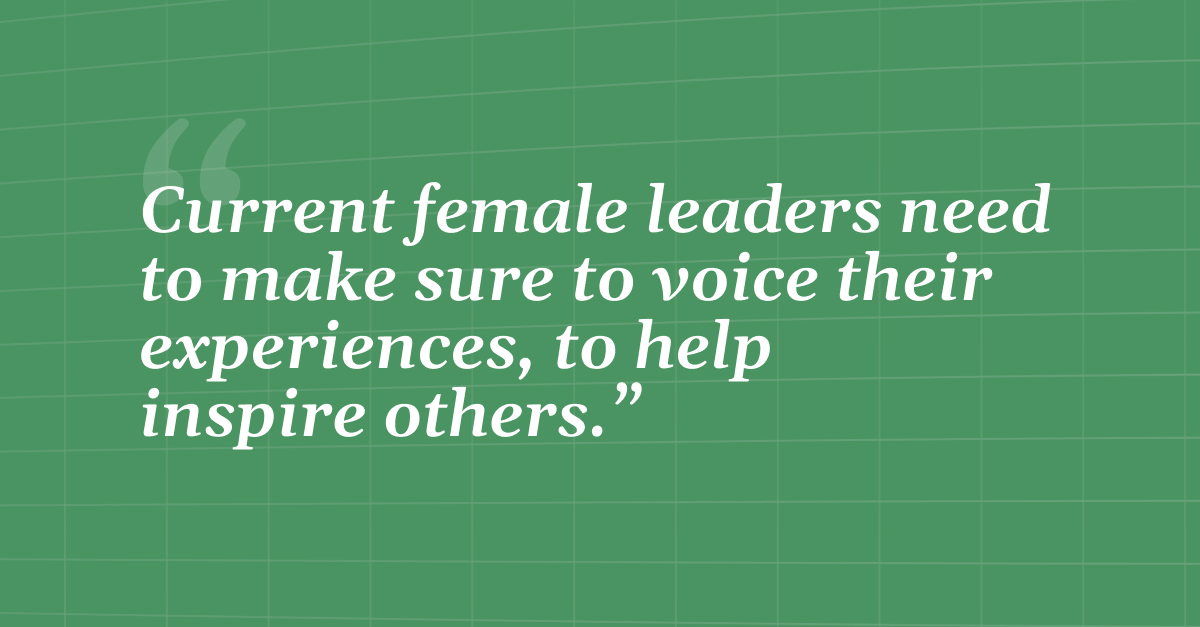 Principle #5: Be Visible For Those Who Come Behind

Female leaders should share their stories, give more interviews and take up mentorship roles, Jennifer said when we spoke to her two years ago. By being visible, she added, you act as a role model, helping the next generation learn that their goals are possible even when self-doubt or other challenges get in the way.

And Jennifer is no stranger to adversity. She’s navigated a career in corporate finance with dyslexia, working her way up to her role as Controller at BurgerBusters Inc., a Virginia Beach, VA franchise operations. But in 2020, after 10 years in the workforce, Jennifer told Vena she’d never felt any different as a woman compared to her male counterparts. She was also afforded all of the same opportunities as men. “I don't really think of myself as a woman in finance as much as just a good controller. I’ve been fortunate enough not to have had any bad experiences based on my gender,” she shared.

While part of her own experience may be influenced by the fact that she didn’t have any children when we spoke to her—she saw colleagues with kids struggling more with work-life balance— she also saw it as a sign that things were changing.

But that didn’t mean more change wasn’t needed too. 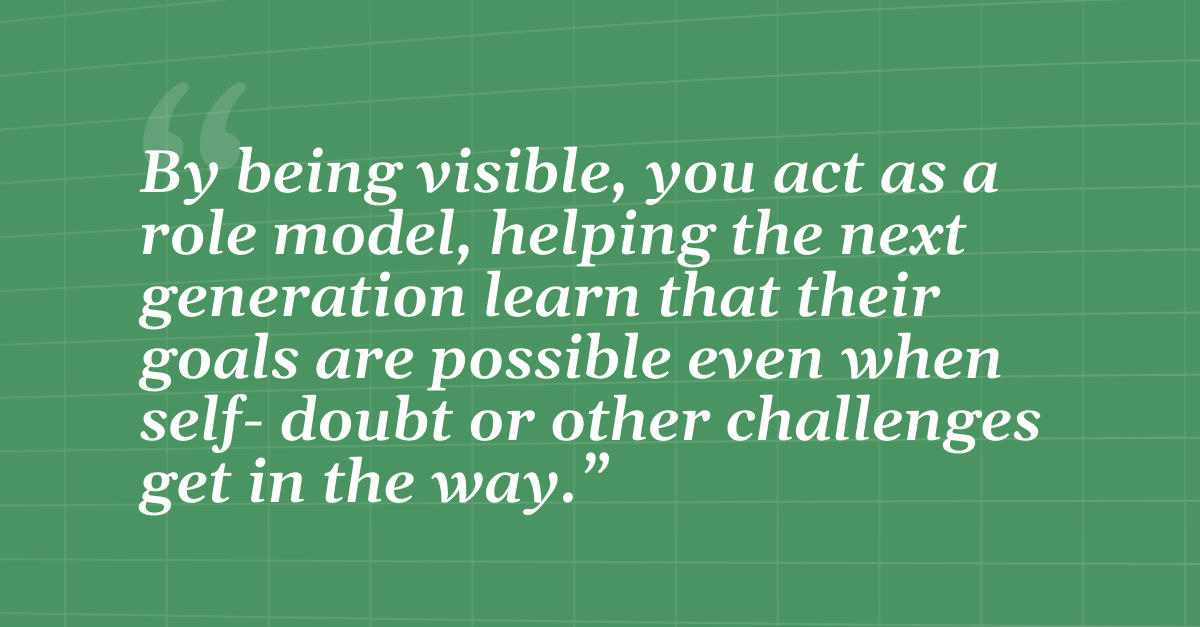 The Need for Top-Level Change

Where Jennifer saw the need for more change was at the top leadership level. “I would say definitely at the entry level there's a strong female presence,” she said at the time. “Then as you work up the chain, it does seem to become more predominantly male.”

It’s an observation we see played out in the data time and time again. And that was as true then as it is now. In 2017, the Financial Times studied 50 of the world’s biggest banks, insurers, asset managers and professional services firms to see how they were doing in terms of gender parity. “The data revealed that the share of women plunges dramatically as employees move up through the ranks at their institutions,” they found. Another study in 2016 by Catalyst found that “almost two-thirds of women reported a lack of senior or visibly successful female role models as a major obstacle to their career advancement.”

In 2021, meanwhile, a study by McKinsey & Company and LeanIn.Org looking at the finance industry specifically, revealed that there are actually more women (52%) at entry levels than men. Despite that, 64% of financial services C-suite executives are still white men. 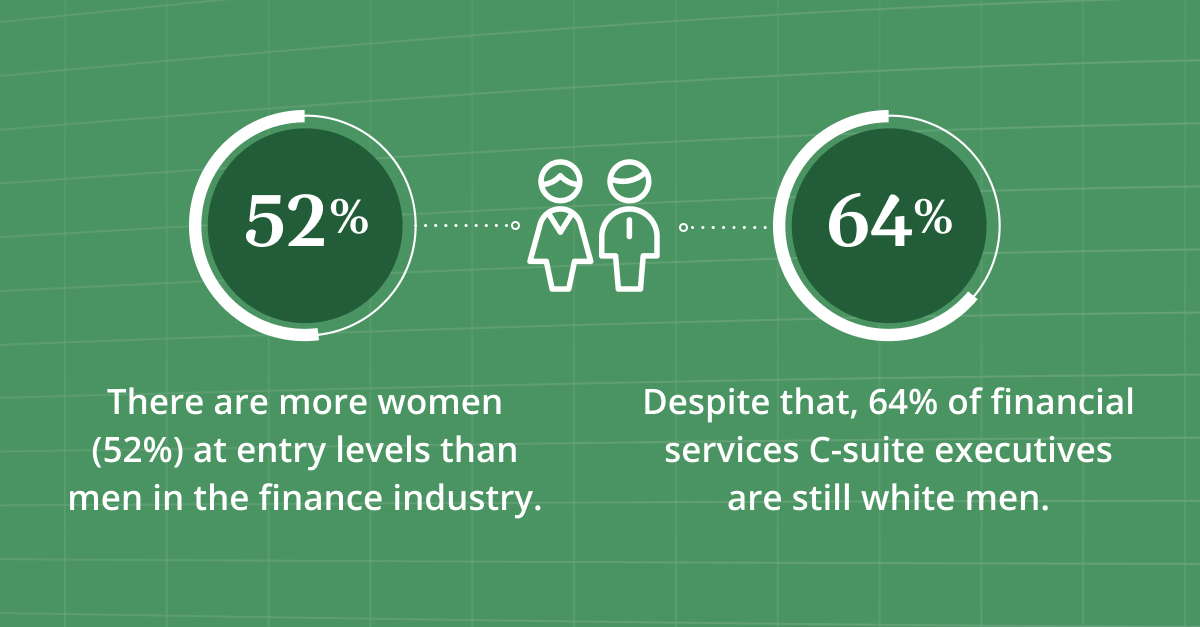 So what will it take to turn those numbers around?

Visibility, Jennifer suggested two years ago, was one answer. Young women considering a career in corporate finance, or those working their way up the ranks, need role models. That starts with female leaders speaking out and sharing their experiences. And it continues by building a collaborative environment in the workplace where women and men at all levels can share their experiences and knowledge, helping each other and the team as a whole. All of which, she added, was already beginning to happen when we spoke to her. “I do feel like in time we'll see more females taking more leadership roles,” she said.

Then the pandemic hit.

Now, women have even more to contend with, as they leave or consider leaving the workforce in record numbers and struggle to find the flexibility they need to manage the requirements of both home and work. Still, Jennifer’s advice from back then is still valid to women starting out in finance today—even if it may be more difficult now to achieve. Because, like then, women still need to create a foundation they can build on—and they need to put that in place as early as they can.

“Your early jobs are where you're going to learn the most,” she said. “So try not to cut corners. Go above and beyond—whether it's advancing your education or getting certified outside of work for a CPA license or any kind of betterment of yourself.”

But what else can be done?

This series of blog posts has examined advice from women, for women. It’s talked about all of the obstacles women face and advice for overcoming them: the old boys’ club culture, talented women overlooked for C-level roles, fewer female role models to look up to and continued bias against women of color and those who identify as trans or nonbinary. And we’ve looked at how the pandemic has only added to those burdens, with an increased threat of burnout and the added emotional labor they’re shouldering to support the well-being of colleagues and family members.

What we’ve only touched on, though, is that women shouldn’t have to face any of that alone.

If you don’t put the responsibility of overcoming the gender gap on women and women alone, there is a lot more that can be done. In an analysis of their research on women in finance, McKinsey & Company and LeanIn.Org suggest it’s imperative the companies those women work for do their part in fixing the gender divide as well. And they offer several suggestions on how businesses can do that:

By taking some of the responsibility for building up their female talent and supporting the women on their teams, businesses can show how much they respect and appreciate those (and all) women. And we think that’s a critical step in closing the gender divide—both in corporate finance and beyond.

Learn more about Vena’s Network for Women+ and how we support women+ in the workplace.