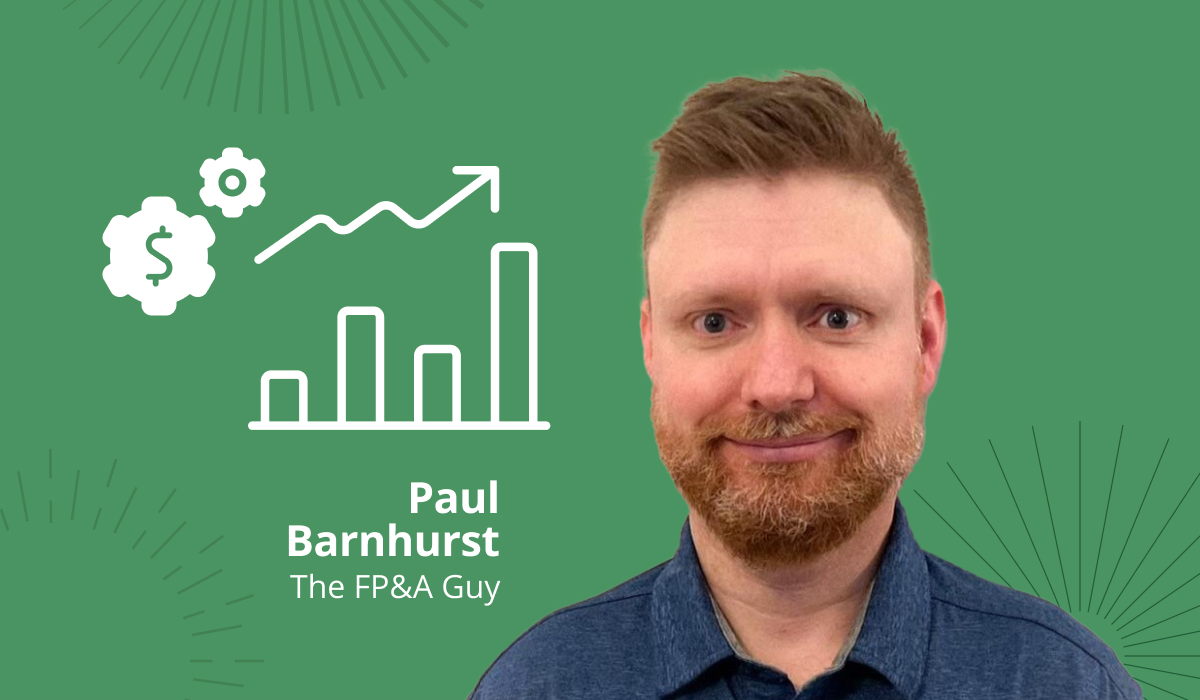 Part 2: In Conversation With The FP&A Guy—Financial Modeling and Contemporary Strategic Finance Skills

Also known as “The FP&A Guy,” Paul Barnhurst has been a leader, influencer and educator in the FP&A community for years. Ahead of his two sessions at Excelerate =SUM(it) 2022—the first on financial modeling, the second on contemporary skills—we sat down with Paul to chat. We talked about the essential skills that finance professionals need for the future, how you know you’re adding value to your organization and the business plans he designed in high school.

Here’s the final installment of our two-part interview series with Paul Barnhurst, “The FP&A Guy.”

If you missed part one where we discussed Microsoft Excel, how Paul cultivated a community of FP&A professionals on LinkedIn and where he believes the future of FP&A is heading, click here to check it out.

Why do you think it’s important for finance teams to elevate their role within their organization and become strategic partners to the business?

Paul Barnhurst: I would say there's a couple of reasons. One would be from a career perspective—it's a much more exciting job in my opinion It also makes you invaluable. If all you're doing is the reporting side of FP&A, a lot of that can be automated. And when [businesses] look to either automate or outsource, you’re going to be a key candidate. But, if you're viewed as a trusted advisor and somebody that’s indispensable, then you provide real value. I still remember I had a general manager at one job that said to me, ‘Paul, many people in FP&A just report the financials. You help shape them.’ And what he meant by that was [as an FP&A professional] you actually influence the business—you're helping make a positive difference in the business’s results. And I knew at that point that I had a job with that person for as long as I wanted. I ended up moving on to something else, but I had become invaluable by essentially acting as a “right-hand man” to the general manager of that business. And for that reason, the general manager viewed me more as a “value-adding asset” to the business instead of just someone he had to deal with for planning season. 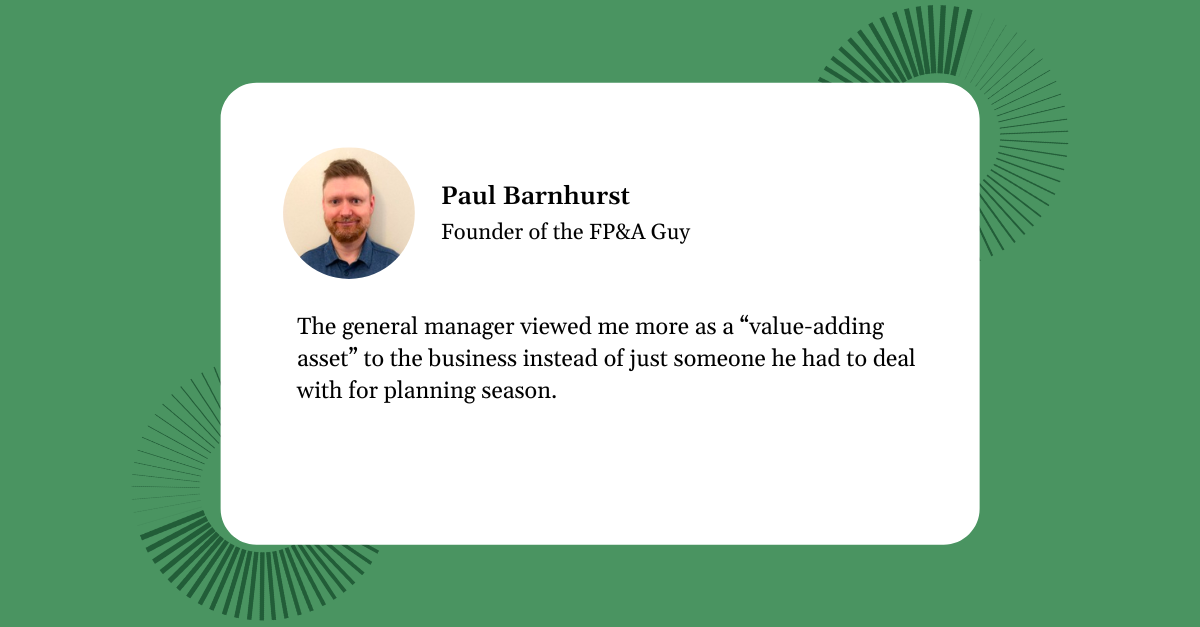 How can FP&A professionals be sure that their insights are helping the business?

PB: Great question! In my case, there were times where I felt like I wasn't adding value. I worked with one general manager and he chose somebody else to promote into a role and didn't give me a chance because he felt like I was too detail-oriented and wasn't providing the strategic value he was looking for. And so that's something that I consciously worked on for quite a while—focusing on the bottom line and the big picture instead of the minutiae.

Now there are signs I know to look for that confirm that my efforts are making a difference—like when the business turns to me as a trusted advisor and asks questions that extend beyond finance. I've always prided myself on knowing every organization I’ve worked at really well, and I’ve always made a concerted effort to build relationships with individuals across the business in order to truly understand how it functions outside of the finance department.

I can think of two different jobs where I was trusted enough that people [within the company] would ask me questions that had nothing to do with finance. They would come to me for advice on different things they were doing instead of just telling me, ‘Oh, hey, you need to put this in the plan.’ They would come to me with questions like, ’How do you think we should manage this?’ Or, ‘Hey, we're thinking of rolling out this new campaign. What do you think about that?’ And that's when I knew I was adding value because I wasn't just being viewed as the numbers guy, so to speak. They weren't just coming to me when they had to—they were coming to me because they felt like I could add value. In another role, there were times when the product and marketing teams would ask me for advice on pricing. And I’d say, ‘My job isn't to set the price. I can tell you what we need from a financial standpoint to make this product viable, but it's your job to understand the market.’ At that point I realized that if people across the business trusted me enough to ask me those types of questions, I must be adding value. 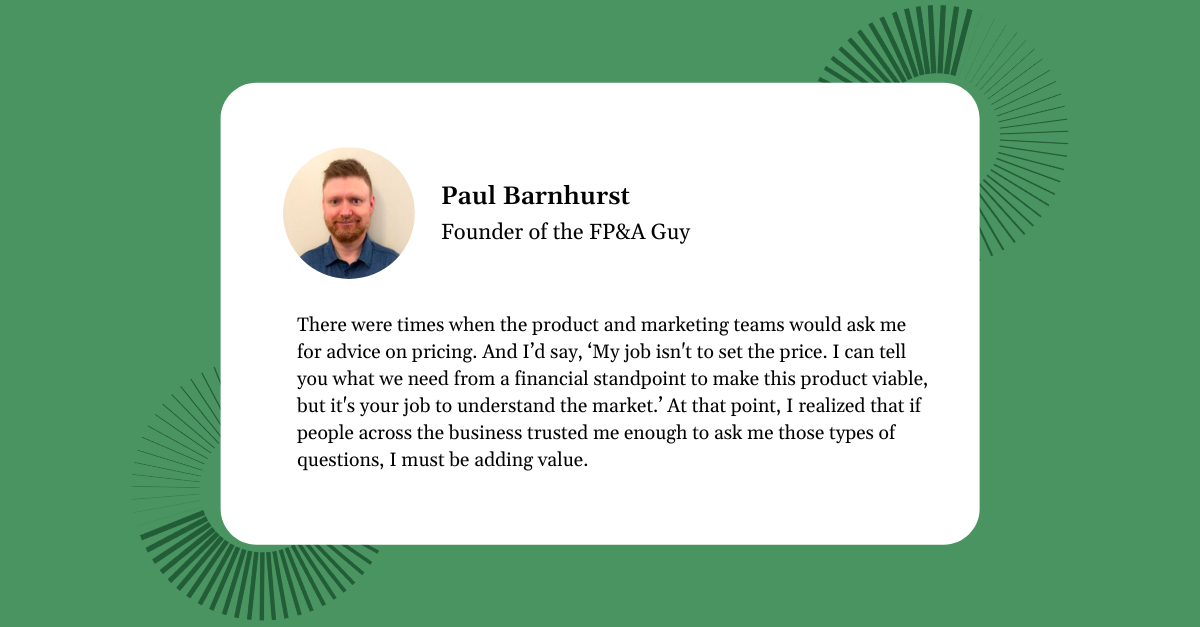 The first of your two sessions at Excelerate =SUM(it) 2022 is a workshop on financial modeling, and we’re excited to share that it’s one of our highest registered sessions. Why is financial modeling so important in 2022 and beyond?

PB: Being able to build a good financial model is essential to FP&A—you have to be able to do it. It's the “bread and butter” [of FP&A]. When someone can build a good financial model that understands key drivers and is flexible, it can add a lot of value to the business. Conversely, a poorly designed model can cause a business to make the wrong decisions based on the information you’ve provided. And that can be—I don't want to say fatal—but it can certainly make a big impact that could lead to negative repercussions. So following best-in-class design principles and having the ability to create good financial models is absolutely fundamental to the role. You just have to be able to do it. 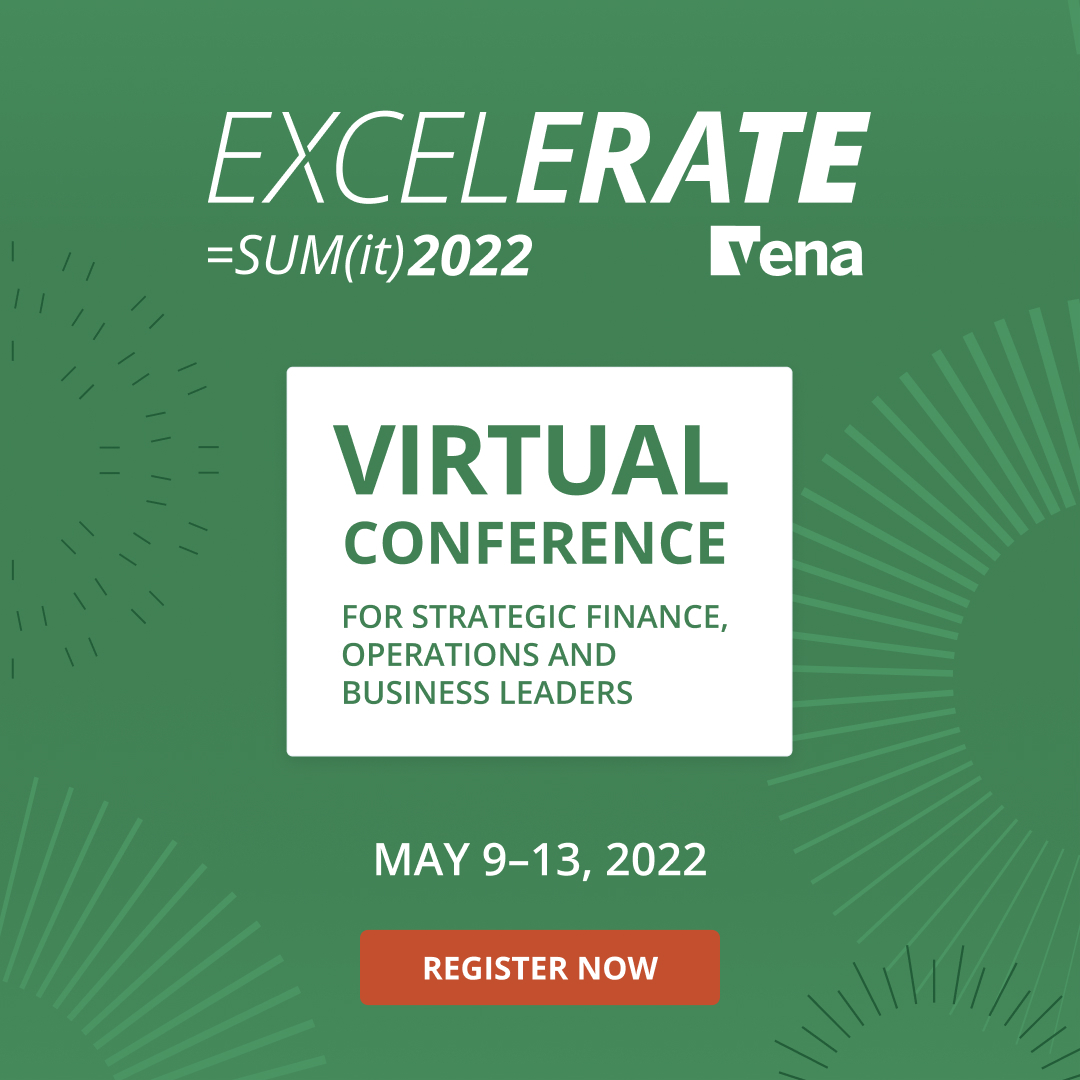 Your other session is a panel discussion on “Contemporary Skills for Strategic Finance Professionals.” What’s one contemporary skill you think finance professionals currently lack that you see a need for in the near future?

PB:The biggest skills finance professionals need to work on to prepare for the future are what we often refer to as “soft skills”—those non-technical, essential skills we all need to have. As I've heard it said before, ‘Your technical skills get you your first job. Your soft skills get you promoted.’ 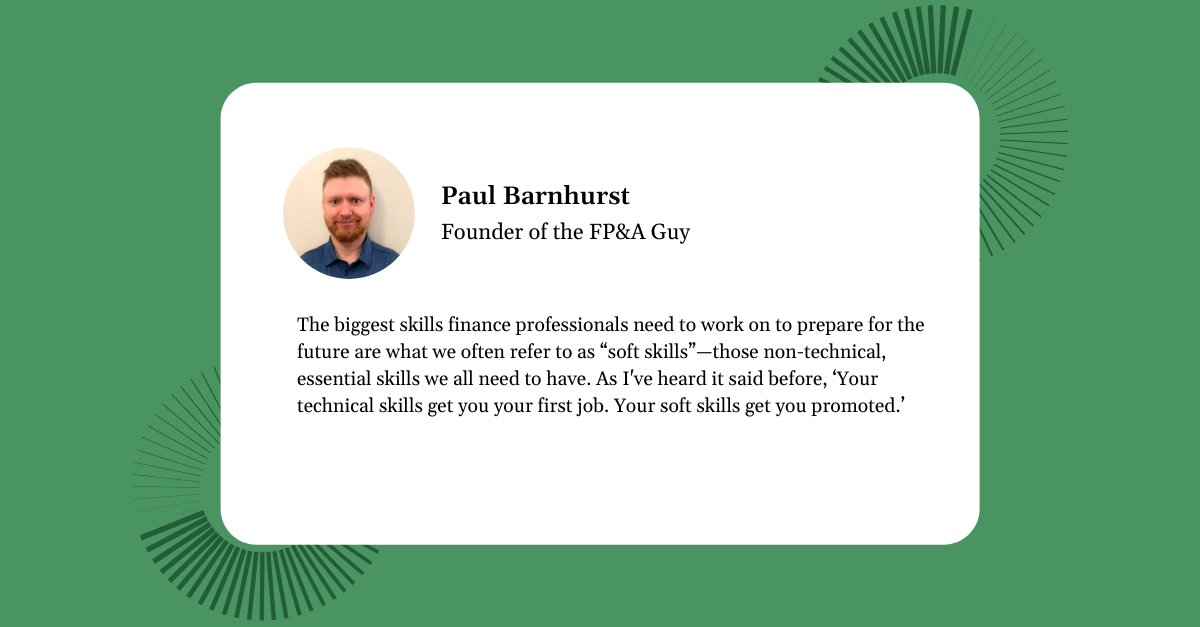 Another essential skill I think the FP&A community needs to focus on is business partnering—and storytelling and influencing go hand in hand with that. It's critical to be able to effectively communicate and help influence and drive business decisions based on the analysis you've done. That's the last mile, and it's just so critical.

Let’s finish with your journey to becoming “The FP&A Guy.” For those who don’t know your story, can you walk us through it?

But more recently, a few things came up and I found myself saying, ‘Hey, I think I can actually turn this into a viable business!’ When I first mentioned that to my wife she thought I was crazy, but after a month or two she came around to the idea. In the meantime, I kept looking at [the business plan] and going, ‘Okay, there's enough here. I can actually do this.’ So that's really how the “shelved dream” became a reality and the business itself came about.

That’s exciting, we’re rooting for you! There’s one detail we feel like we’re missing, though—what was in that business plan you created in high school?

PB: I actually wrote two different plans, the first of which was in my junior year. That business plan was for a new and used computer store and with that plan I was entered to compete in DECA (Distributive Education Clubs of America), which is a state competition that encourages the development of business and leadership skills.

The following year, I wrote another business plan, this time for an indoor running track with a shoe store—I believe “Running Soul” was the name of the company. I got to participate in DECA for a second year in a row and competed in nationals. I went on to write another business plan in college because I majored in Entrepreneurship, so I've written around three or four business plans altogether.

Do you have any hobbies or passions that your followers might be surprised to learn about?

PB: There's actually a couple of passions I have that I don't necessarily talk about online. I'm a big fan of running, hiking and working with youth. I’ve done Junior Achievement, I taught Toastmasters in a high school classroom and I also participated in the Big Brothers Big Sisters program. In fact, I still keep in touch with a kid I worked with about 12 years ago when I acted as his first mentor. I also did Boy Scouts for years—I was a leader for young men, so that's another passion of mine. I've always enjoyed working with young people and I love the outdoors.

Any plans on teaching financial literacy?

PB: At this point in life, my focus has really been on business and my family. But obviously I plan to teach my daughter all about financial literacy. Actually, I have a funny story somewhat related to that and teaching children about our jobs. My daughter was listening to one of my FP&A podcasts the other day and heard me talk about PowerPoint. So last week—and every time I see her now—she wants my computer so she can ‘play with PowerPoint.’ I have to tell her, ‘Daddy needs to work right now.’ And she’ll reply, ‘When will you be done?’

She must have asked me three or four times yesterday alone when I’d be done so she could use my computer. She kind of just plays in it—she doesn't really ‘do’ PowerPoint. She'll open up a bunch of different templates, make up stories, write a few words and move on to the next one. It's kind of cute. PB: For 2023 (and beyond), I have a few things on the horizon. At the moment, I'm doing a little bit of consulting, launched an FP&A podcast and over the next three to nine months, you can expect to see some brand new FP&A courses on my website.

Power Your Growth With “The FP&A Guy” Paul Barnhurst

Join 5,000+ professionals at Vena’s third annual virtual conference, Excelerate =SUM(it) 2022, to hear the latest best practices from Paul on financial modeling and how you can level up your essential strategic finance skills.