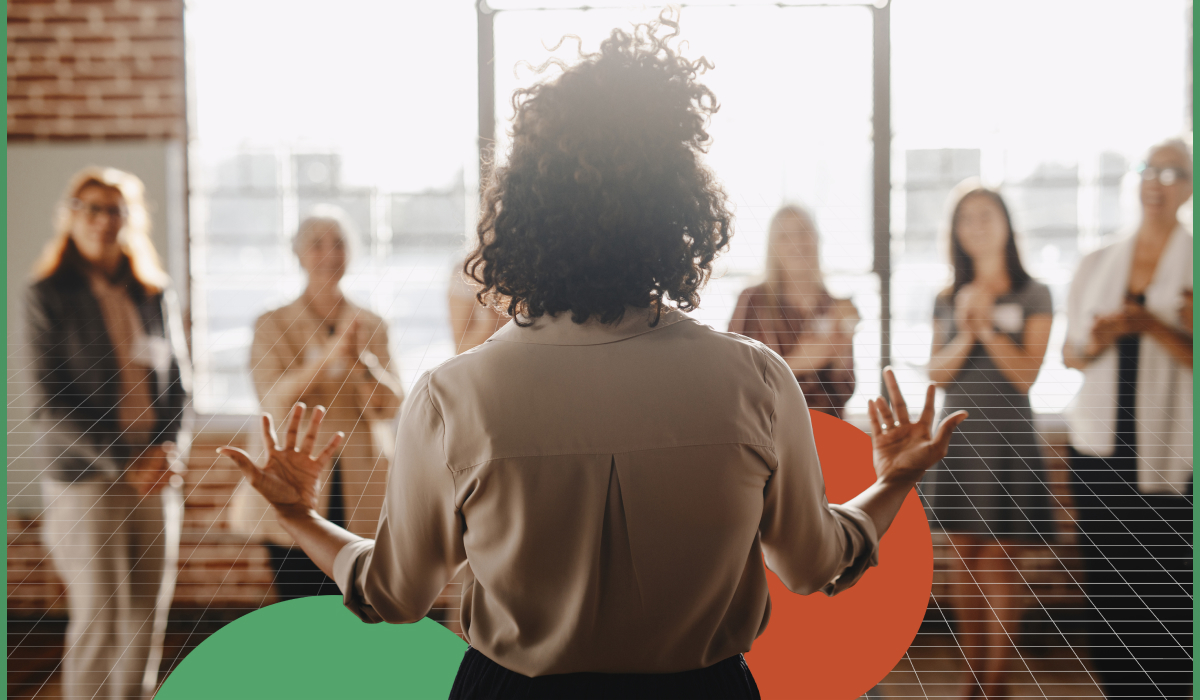 Women in Corporate Finance: Find Advocates for the Qualities You Bring

This is the fourth part of a blog series based on an ebook we published in 2020 entitled, “Women in Corporate Finance: Five Guiding Principles From Leaders in the Field.”

In this post, we speak to Laura Szreider, Head of FP&A at Intelligent Processing Solutions Limited.

We saw as much in the last blog post in this series. According to the Women in the Workplace 2021 report by Lean In and McKinsey & Company, women managers do more to support their team and promote employee well-being. They help them navigate work-life balance, deal with burnout and manage their workloads. And they’re also more likely to take on mentorship roles, support career development and advocate for diversity, equity and inclusion (DEI). In fact, the Lean In and McKinsey & Company research shows that 38% of women at senior levels mentor or sponsor a woman of color—compared to just 26% of senior-level men.

All of that work has real effects in the workplace. It leaves employees wanting to be there, less likely to leave and less prone to burnout.

Since turnover can cost employers 33% of an employee’s annual salary—and holding on to employees is even more difficult than ever during the Great Resignation—those are significant skills to have in the modern workforce. And, as we saw in the last post, it’s only some of what women bring. Despite that, though, those skills are often overlooked when performance review time comes around.

Of the companies polled in the Women in the Workplace 2021 survey, 87% saw supporting employee well-being as a critical function, yet only 25% of those companies actually recognized it in any substantial way when it came to formal evaluations like performance reviews. When it came to DEI, 70% saw it as critical, but just 24% recognized it formally. “I definitely think emotional labor is being taken for granted,” one woman who was surveyed responded.

And since performance reviews are often used to negotiate promotions and raises, women are once again left at a disadvantage. So how do they make their mark in a way that will put them on the trajectory to career growth? 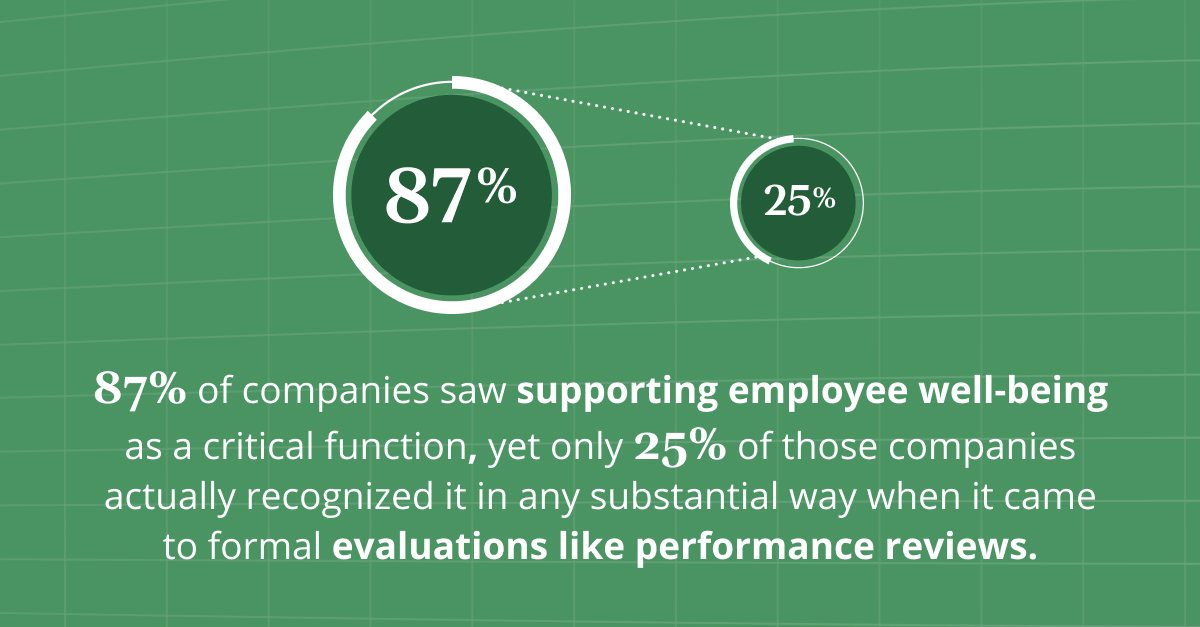 “A lot of emotional energy goes in for a woman who wants to progress, in thinking about how she positions herself all of the time,” Laura Szreider, Head of FP&A at the UK-based Intelligent Processing Solutions Limited (iPSL), said when we talked to her in 2020. 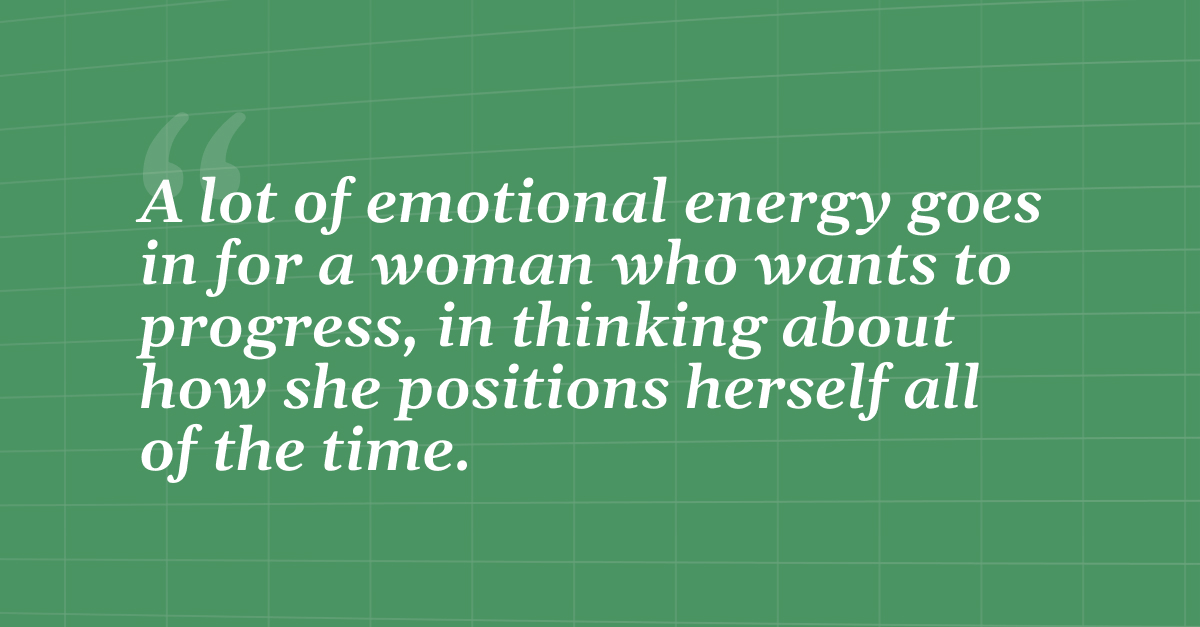 Women are often measured by “a different yardstick” than men, Laura said then. And there’s plenty to support Laura’s words.

While the confidence gap between men and women has long been considered one factor behind the lack of workplace parity, research shows that’s not necessarily the case, finding that it’s women’s reluctance to self-promote that’s actually slowing them down—and for good reason. Namely, self-promotion doesn’t get them very far either—in fact, it’s often looked at negatively in women.

“While assertive self-advocacy lines up nicely with the long-standing stereotype of the ambitious male go-getter, some studies show that when women demonstrate identical behaviors, they elicit negative reactions for failing to show stereotypical ‘feminine traits,’” Jo Miller, author of Woman of Influence: 9 Steps to Build Your Brand, Establish Your Legacy, & Thrive, wrote in 2021. 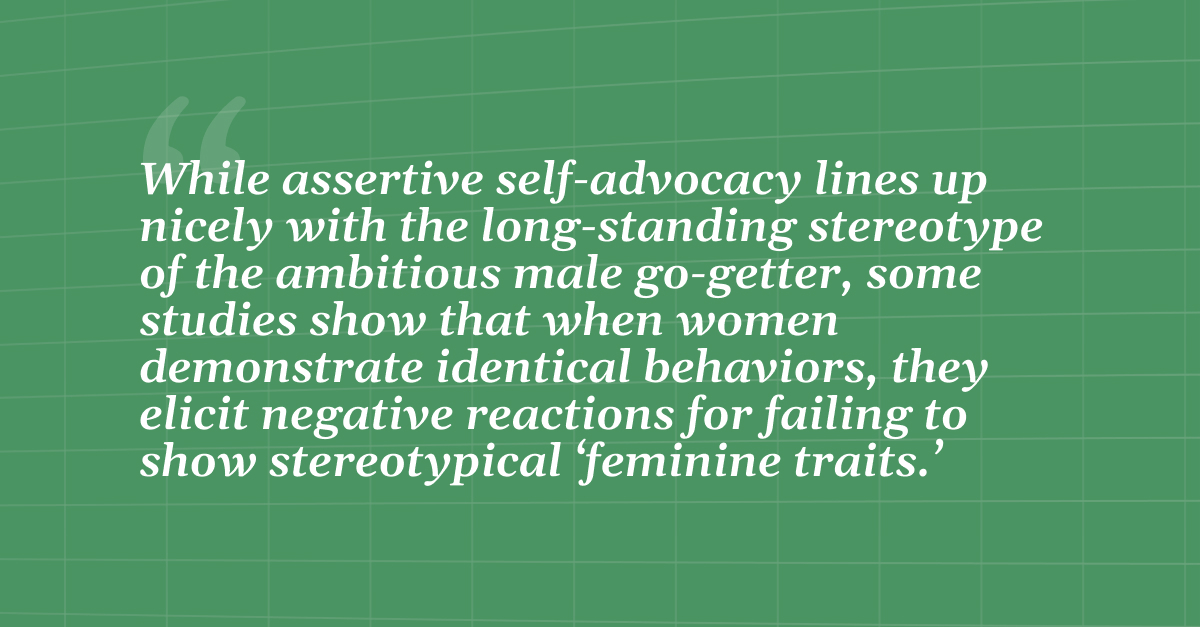 Research has found that appearing self-confident “did not translate into influence equally for men and women.” For women—unlike men—influence was more tied to how warm and caring they appeared than how self-confident. “Where their male colleagues are allowed to focus on their own objectives, women who are expected to care for others are shouldering an unfair load,” the researcher concluded in the Harvard Business Review. 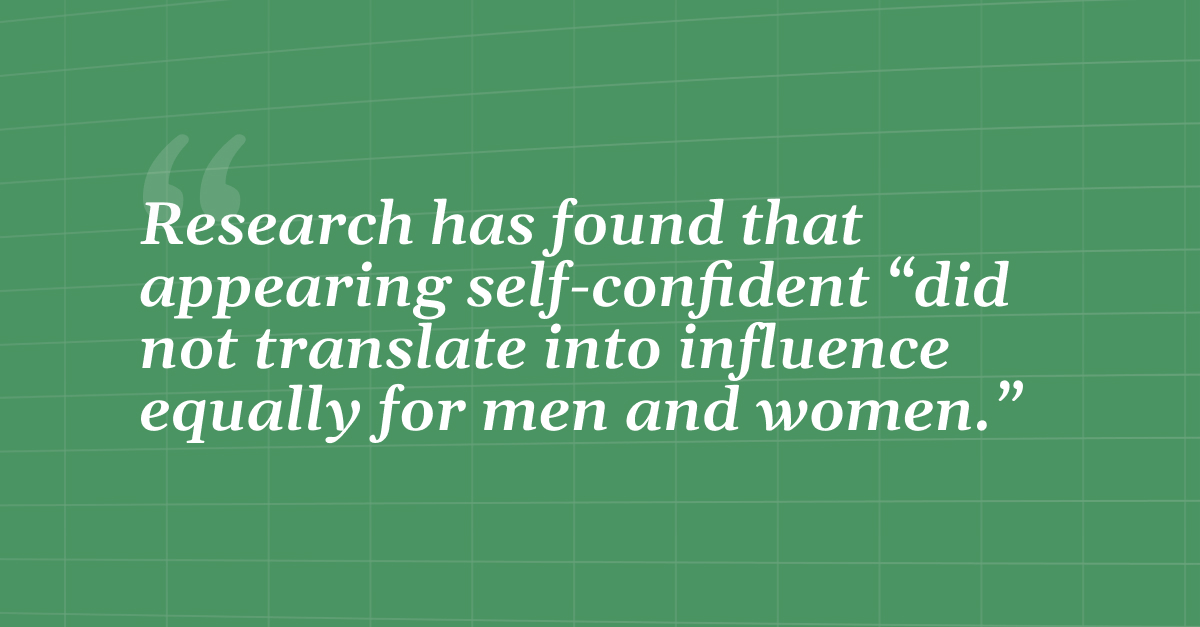 Which brings us back to where we started. Because, as we’ve already seen, women are taking on more of that “emotional labor” than ever—but that isn’t translating into the same formal recognition and career advancement. It’s no wonder, then, that Laura said women have to constantly grapple with how they’re putting themselves forward—to appear confident, but not too confident, and assertive, but not too assertive. “I think women have to think much harder about how they communicate,” she said.

Where the Right Advocates Fit In

Since workplaces are often naturally geared towards men’s communication styles, Laura said two years ago, women are often spending their “emotional energy” thinking and rethinking how they approach every situation. “It's always that balance about being soft, but not too soft; hard, but not too hard,” she maintained.

Finding the right advocates and leaders that recognize the unique qualities you bring is one way women can get ahead, Laura suggested then. Having someone in your corner can help women focus on doing their jobs well instead of stressing over how that’s communicated or whether the strengths they’re bringing are being overlooked.

In almost two decades in corporate finance, Laura herself has learned to look for leaders who won’t just back her up, but also encourage her to be open about her goals and how she plans to achieve them.

“I think women quite often can be afraid to say what they want,” she said in 2020. “Actually saying, ‘I see myself on the boards, I see myself in the senior management role,’ feels like a really big deal. It feels like almost putting yourself somewhere where you shouldn't be. It feels presumptuous.”

But doing so, and finding the teams that align with those goals and support them, can help women get exactly where they want to go. Which leads us to the advice Laura gave to young women coming up in the corporate finance workforce today.

Believing you can accomplish your goals, after all, is a good first step to finding others who think so too.

Learn how to challenge the “She-Cession” with the help of workforce planning.

In our final blog post in this series, we’ll talk to Jennifer Korbely, Controller with BurgerBusters, Inc., about staying visible.